C4 is Cellucor's flagship product - and the Original version is their best seller. It's a popular pre-workout supplement with beta-alanine, creatine, caffeine and various other ingredients, along with host of vitamins.

In this C4 Original review, I'll take a closer look at this pre-workout supplement to find out whether it lives up to the hype. I'm particularly interested in the ingredients profile and whether the doses are backed by clinical data. Let's get started!

Quick Navigation
Basic Overview of C4 Original
Ingredients Profile and Formula
Taste, Dosing & Mixability
How Effective is This Pre-Workout?
Price and Value for Money
FAQ
Should I Be Worried About C4 Side Effects?
Do I Need to Cycle It?
Where Can I Buy It?
Summary & Rating

Cellucor C4 is one of the most popular brands of pre-workout supplement in the US. C4 is actually a range of supplements, including Sport, Extreme, Ultimate, 50x, Gen 4, Ripped and various others, but this review focuses on C4 Original.

According to Cellucor, C4 Original aims to provide the following benefits:

There's no doubt that C4 Original is a popular option. It's used by millions of people and is even America's top-selling PWO. As we all know, popularity and marketing hype doesn't always equal quality though. So, let's take a closer look at the ingredients, doses and taste of the C4 supplement. These are exciting claims, but are they backed by science?  After all, when you strip away the marketing, hype and popularity of any supplement, its effectiveness rests entirely on the ingredient profile.

While certain ingredients have synergistic properties, these are often over-hyped. That makes it relatively easy to judge the effectiveness of a pre-workout just by looking at its list of ingredients and doses.

How does C4's ingredient list compare to others though?

The first thing to note is that C4 Original contains a proprietary "Explosive Energy Blend."

This is an instant warning sign for me. I'm not a fan of proprietary blends in any supplement. I want to know exactly what I'm taking with every dose, and I'm guessing you do too.

With that said, most of the important ingredients of C4 Original are transparently listed (including caffeine which is part of the proprietary blend). The exception is L-Tyrosine, but I'll get to that in a moment.

The second thing to note is that C4 Original doesn't contain L-Citrulline. I consider citrulline to be a key ingredient in a modern pre-workout supplement, as I mentioned in my guide to pre-workouts, so this is another negative for C4. Cellucor has included Arginine as an alternative NO booster, but it's not as effective.

With these warnings out of the way, here's an overview of its most important ingredients and doses:

As you've probably guessed by now, I think C4 Original has a mediocre ingredients list. It's not terrible and will provide a notable boost in energy while reducing fatigue, but there are much better options on the market. The most important ingredients are caffeine, creatine, beta alanine and tyrosine, which are all proven to provide benefits during or after a workout - but the doses are relatively low.

There are also a host of both natural and artificial flavors (such as sucralose). Many newer pre workout supplements have an all-natural ingredients list, but this isn't the case with C4.

There are some good parts of C4 Original, such as the Beta Alanine, but it's missing some important ingredients (L-Citrulline and Betaine in particular). The ingredients aren't always included at clinically-proven doses either.

One of the advantages of C4 Original is that it tastes great - at least compared to most pre-workouts! It's not too sweet and is relatively pleasant to drink.

It's also available in a variety of different flavors. These include Cherry Lemonade, Fruit Punch, Green Apple, Watermelon, Orange Burst and Pink Lemonade. My favorite is Juicy Candy Burst (although I haven't tried them all), but you'll probably want to experiment.

Cellucor recommends taking one scoop with 4-6 fl.oz. of water around 30 minutes before your workout. This provide enough time for the caffeine and other ingredients to kick in.

Once you've assessed your tolerance, there's the option of increasing the dose to 2 scoops before a workout (don't take any more than this though).

How Effective is This Pre-Workout?

To put it bluntly, I'm unimpressed by C4 Original. It might be a popular pre-workout supplement, but it's far from the best.

With that said, it will provide some positive effects. The Beta-Alanine, in particular, can help reduce fatigue and increase workout capacity (although I would have liked a higher dose). The caffeine also acts as a stimulant, although this is found in almost every pre-workout. Arginine may have benefits too, particularly for muscle pump and blood flow.

There's also the option to double dose. This provides a huge 300mg hit of caffeine, so it'll certainly wake you up. Make sure you assess your tolerance with a single scoop before you try this though.

Price and Value for Money

So far, I've been quite harsh on C4 Original. I don't think it provides the best ingredients at the right doses, so it's hard to recommend it over some of the great pre-workouts that are now available.

The price is an area where C4 Original shines though. You can buy a tub of 30 servings for $30, or 60 servings for $49.99. This means the cost per serving is $0.83 - $1, which is considerably cheaper than many pre-workouts. Legion Pulse, for example, costs close to double.

Even so, it's hard to say C4 Original provides value for money. PreSeries Bulk has a much better ingredients list and can be bought for around $1.35 per serving. The extra cost is worth it if you want to maximize performance.

Should I Be Worried About C4 Side Effects?

I say this in every review, but it's worth repeating: any supplement can cause potential side effects. Whether you experience any depends on your tolerance and genetics, which is why it's important to assess a pre workout at a lower dose. I also recommend reading the instruction booklet carefully and talking to your doctor before starting any new supplement.

C4 Original doesn't include any of the worst offenders when it comes to side effects though. Ingredients like DMAA, which is now banned in the US, can cause severe side effects, but they aren't included in C4 Original.

One of the most common side effects of any pre-workout with beta-alanine is tingling in the skin. C4 Original doesn't have a huge dose of beta-alanine, but this side effect is still something to be aware of.

If you notice any side effects, you should stop using a supplement until you've spoken to a medical professional.

Do I Need to Cycle It?

As with all pre-workout supplements that contain caffeine, you should cycle off C4 Original every 6-8 weeks. When cycling, don't consume any caffeine or stimulants, so your body can "reset."

Where Can I Buy It?

Unlike some of the more exclusive pre-workout supplements, C4 Original can be bought at most retailers. This includes Amazon, Bodybuilding.com, GNC, Walgreen, CVS, Walmart, Vitamin Shoppe and the official C4 website.

It's common to find C4 Original being sold at discount rates. It's already a relatively cheap pre-workout, but if you can find a discount deal it might be worth picking up. C4 Original is also sold in most countries, such as the UK, Australia, New Zealand and Canada.

Another of Cellucor's most popular pre-workout supplements is C4 Sport. While both Sport and Original are part of the C4 range, they have different ingredient list.

The biggest difference is that Sport's ingredients are almost entirely a proprietary mix (known as performance blend and concentrated energy). While it contains similar ingredients, such as beta-alanine, arginine and caffeine, the quantities of ingredients are not listed. This makes it almost impossible to recommend. If you're not sure which to buy, I recommend sticking with Original.

Unlike Original, C4 Ripped is designed specifically for people who want to lose fat without burning muscle. This requires a proper diet (including managing calories, protein, carbs and fats), workout routine and mindset - but supplementation can help too.

In many ways, Ripped has a similar ingredients label to Original. It includes the "Explosive Energy Blend" proprietary mix, along with 1600mg of beta-alanine. The additional "Ripped Blend" for losing weight, however, includes ingredients such as green tea extract, L-Carnitine and Cayenne, and it doesn't include creatine. Again, I'm not a fan of supplements that don't include ingredient quantities on their labels.

Cellucor C4 Original might be a popular pre-workout supplement, but I think it's over-hyped. It has a mediocre ingredients profile that misses many important ingredients, including L-Citrulline. The doses are also relatively small, so you may not get the full benefits of the ingredients it does contain. C4 Original is far from the worst pre-workout supplement on the market, and it's available for a great price, but there are much better options. To see which I recommend instead, check out our main PWO page. 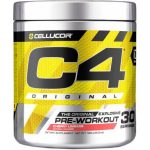 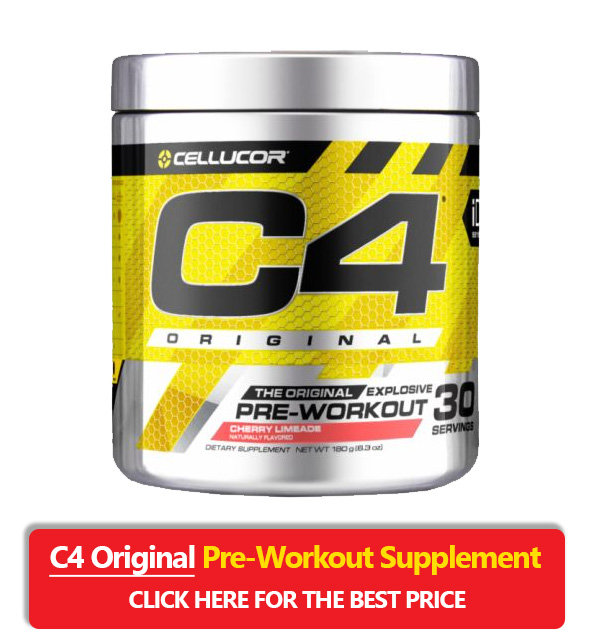 The information on this website does not constitute professional medical or healthcare advice or diagnosis. Under no circumstances should it be used as medical advice to to diagnose, prevent or treat any illness, disease or medical condition. None of the content has been reviewed or written by a medical professional, and you use the information at your own risk.

It is your responsibility to read the label and instructions before using any supplement or other product. You should ALWAYS consult your doctor before using a supplement you see on this website, as not all supplements are suitable for everyone.

All the brands, products and logos on this website are trademarks of their respective companies.

At BeastWorkouts.com, we spend hundreds (if not thousands) of hours researching the products we review. When you buy a product through links on our site, you may help us by earning us a commission. This doesn’t affect the price you pay. If you click a link on our site, you should assume that we get a commission. Read our full disclaimer.

BeastWorkouts.com is a participant in the Amazon Services LLC Associates Program, an affiliate advertising program designed to provide a means for sites to earn advertising fees by advertising and linking to Amazon.com.

Note: Prices are subject to change. The prices we show on this website were correct when the corresponding article was updated, but we do not guarantee the vendor hasn’t changed their prices.